Thousands of spectators visited the KipAero exhibit admiring the new production, full-scale, fully functional Sopwith 1½ Strutter fitted with a new production Gnome Monosoupape 100hp rotary engine. What caught many an eye was the WWI Bessonneau hangar – a temporary structure made of wood and canvas that was used to house airplanes at the front and at Oshkosh. 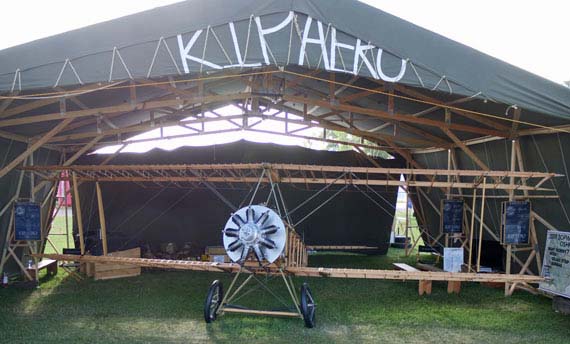 The Sopwith 1½ Strutter was commonly referred to as the ‘workhorse’ of the Great War due to its versatility. It was used extensively by the Royal Naval Air Service (RNAS) as a scout (fighter), for artillery observation and photo reconnaissance, and as a bomber. With the Army’s Royal Flying Corps (RFC) covetous of the RNAS’ Sopwiths, an Advisory Air Board was eventually created to better allocate resources and reduce inter-service rivalries.  Eventually, the RNAS and RFC were merged in April 1918, becoming the Royal Air Force (RAF). During this time, the Sopwith Pup, 1½ Strutter, Triplane and Camel were used extensively by both services to gain air superiority and ultimately win the war. In celebration of the Centennial of the Royal Air Force, any RAF airman attending AirVenture is invited to climb aboard the 1½ Strutter and experience first-hand the cockpits and controls of an early aeroplane.

Produced using the original Sopwith factory drawings, this uncovered, two-seater fighter/trainer allows the enthusiast to examine the construction methods used at the time as well as the working control systems. For those who want to experience exactly what it was like to fly an aeroplane from the Great War era, four Sopwith models are currently offered, either fully assembled or in kit form; 1½ Strutter, Pup, Triplane and Camel.

Daily engine starts attracted large crowds at the Red Barn Vintage area. Tony Wyntenburg, Classic Aero Machining, of New Zealand conducted the engine runs and warned folks to hold on to their hats. This video is in slow motion and then, full speed.

President, Kip Lankenau, is giving the following presentation at Oshkosh 2018. Don’t miss as Kip is  informative and very entertaining!

Find out what it was really like to fly on the Western Front during the Great War (WWI) from the British perspective. From weather and topography, types of machines and their evolution, operations, tactics, training and daily struggles on the front lines, come hear about the trials and tribulations of a British pilot. Updated presentation. Monday, July 23, 11:30am-12:45pm, Hilton Theater.

American Aviation in the Great War

Although it had already been ongoing for over two and a half years, America was not a great military power when she declared war in 1917.  From aircraft, training and combat, find out about America’s aviation experience and contributions during the Great War. Wednesday, July 25, 11:30am-12:45pm, Hilton Theater.

Lighter-Than-Air In the Great War

From balloons and blimps to dirigibles, the importance and use of lighter-than-air was and still is greatly misunderstood. Many commanders of the time considered the support of their lighter than air elements essential to combat operations. Friday, July 27, 10:00am-11:15am, Hilton Theater.